Why the NUJ needs to get real on Bullivant 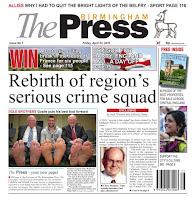 The ever-credulous NUJ removed its head from the sand just long enough this week to hail Chris Bullivant as the saviour of journalism and the Robin Hood of the newspaper industry.

As reported by Jon Slattery and others, NUJ general secretary Jeremy Dear said: “The launch of the Birmingham Press this week is a vote of confidence in the city as a news centre where the skills of writers, photographers and production journalists can help to provide an added service to readers in a complex modern environment.”

Dear concluded: "We warned Trinity Mirror that by collapsing the scope of its publications in the city and making journalists redundant, the market was being opened up for a competitor happy to recruit skilled staff who became unexpectedly available."

The union’s northern organiser Chris Morley said the Press was a ‘significant step’.

Oh please. To read the comments above, you’d think Bullivant had created in his Knowle nerve centre a newsroom bursting at the seams
with well-paid reporters, news editors, a complete picture desk, a features department, night editors and even copy boys. Just like the good old days that the NUJ understands.

The truth, of course, is somewhat different. The Press is being produced by the brilliant Tony Lennox, who through his years running the Post and Mail’s weekly newspapers continued to produce titles even when Trinity (and other owners) had reduced staffing in some cases to 0.5 reporters per title. That’s the skillset Bullivant wants running his editorial operation, which has to be at the lower end of low-cost. The team behind Tony, such as it is, is made up of mates, ex-colleagues and enthusiasts who have been kicking their heels recently and are grateful for the measly lineage on offer from the Press.

Is this really the ‘vote of confidence’ in journalism the NUJ says it is?

The self-regarding NUJ have missed the mark again. They think this battle is about newspapers and journalism in Birmingham. It isn’t – it’s all about a small business trying to take revenue away from a large business – Bullivant only wants to hoover up property advertising revenue from under Trinity Mirror’s nose. Journalists – and journalism – are nothing more than bit-part players in this fight.

As long as Bullivant thinks he’s got the estate agents on side, he’ll keep writing cheques for Tony. As soon as it looks like Trinity Mirror are winning the battle, he’ll pull the plug.